New England Patrons of the Arts in the Vatican Museums > Events > Lighthouse Artspace at the Castle Boston > Immersive Vatican: A Private Viewing

We are excited to share with you an opportunity for a private viewing of Immersive Vatican at the Lighthouse Artspace at the Castle located in Boston.

From the catacomb to the Colonnade, journey through the Vatican and Rome with Lighthouse Immersive's latest, 'Immersive Vatican.'

Experience ancient sculptures, vibrant frescoes, and breathtaking paintings while tracing the pathways and architecture of the Eternal City. 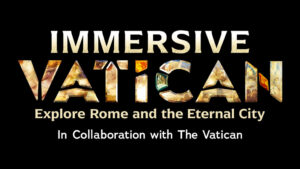 From the producers of the blockbuster Immersive Van Gogh, seen by over 5 million guests across North America, comes an immersive exploration of one of the most spiritually, historically and artistically significant destinations in the world, Vatican City. Lighthouse Immersive and Maestro Immersive Art present Immersive Vatican.

Described as a “journey of ascension” by Creator Massimiliano Siccardi, Immersive Vatican takes audiences from the Roman catacombs that span hundreds of miles beneath the city to one of the most famous monuments in the world, Bernini’s magnificent colonnade. The program examines centuries of cultural events, both Biblical and historical, expressed in magnificent paintings, ancient sculptures, vibrant frescoes and towering architecture, all preserved to help us better understand our complex global history. Composed of thousands of high-resolution photographs and brought to life with animation and a moving score, visitors will be surrounded by the Baroque masterpieces of St. Peter’s Basilica, Michelangelo’s Sistine Chapel frescoes, the artifacts of the Vatican Museums and more.

“This piece focuses on one of the world’s most significant and largest collections of great art, the Vatican, which holds a special place in my heart. The program delves into how art has been used in the Vatican to tell stories and preserve histories, both sacred and secular,” said Massimiliano Siccardi, creator of Immersive Vatican as well as Immersive Van Gogh, Immersive Frida Kahlo, Immersive Klimt: Revolution and Immersive Monet & The Impressionists.

The Italian creative team that has worked with Siccardi on his previous projects for Lighthouse Immersive are reprising their roles for Immersive Vatican. Multimedia composer Luca Longobardi has assembled a soundtrack of both original and curated music to accompany the angelic visuals, and Vittorio Guidotti is returning as Art Director.

“Boston’s vast Catholic community certainly played into our decision to debut Immersive Vatican here, however, we are confident that all audiences will find something to admire in this piece,” said Corey Ross, producer of Immersive Vatican and co-founder of Lighthouse Immersive. “Centuries worth of history are carved, painted and sculpted into this monument to western art and culture, in addition to the 70,000+ artifacts in the Vatican Museums. This program also has tremendous educational value as an introductory exploration of the Vatican’s art and architecture, particularly for those who have not had the opportunity to visit it in person.”

The most legendary artworks featured in Immersive Vatican are the ones Michelangelo created for the Sistine Chapel, including The Last Judgement and his nine-panel fresco depicting the major events from the book of Genesis, of which The Creation of Adam is the most iconic. Others in the series include The Separation of Light from Darkness, The Creation of the Sun, Moon and Plants, The Separation of Land and Water, The Creation of Eve, The Fall and Expulsion from the Garden of Eden, The Sacrifice of Noah, The Flood and The Drunkenness of Noah. Other world-renowned artworks featured in Immersive Vatican are Caravaggio’s Madonna and Child with St. Anne, Boy with a Basket of Fruit and Crucifixion of St. Peter. Donato Creti’s Astronomical Observations series is prominently featured, presenting the solar system as it was understood in the 18th century. The great Raphael’s Primo Moto and The Original Sin make an appearance, as well as Pinturicchio’s famous Annunciation fresco. Also included are blueprints for a variety of architectural marvels in the Vatican, drawn up by 18th century architect Giovanni Battista Piranesi.

Your ticket for the: Immersive Vatican: A Private Viewing

Lighthouse Artspace at the Castle Boston