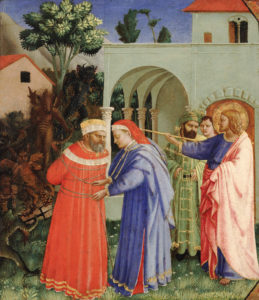 Dear Patrons of the Vatican Museum’s in Boston,

Thank you very much for the possibility given to me to present some of the Vatican Museum’s masterpieces in this writen way. Allow me to greet you from High Tatras, the Eastern Europe region which connects Slovakia to Poland and was particularly loved by Pope John Paul II. I desire to share with you my admiration, as probably some of you already know, for “angelic painter”, blessed Angelico – Fra Giovanni da Fiesole (Tuscany) born Guido di Piero and his work. Pope John Paul II proclamed him blessed on 3 October 1982 and Patron of Artists.

Fra Angelico was an artist and contemporarly a saint who offered his life for Christ but who still, even today, is praised not only for his artistic ability, beauty but also for his deep spirituality. His artistic creativity went path by path with the search of God’s will and obbedience to the Church.

Just few meters from the majestic Costantinian Hall of the Raphael Rooms, a small entrance takes the visitor inside the Chapel decorated by Angelico and his workshop for Pope Nicolas V in the Vatican. Immediately the beauty of the decoration of the Chapel, as a jewel of Angelico’s work and spirituality, wraps the visitor around.

From the cross-formed vault the figures of four evangelists announces the Word of God: we recognize St.Marc painted together with his symbol – the lion, St.Mattew with the angel, St.Luke with the bull and St.John with the eagle. Each evangelist holds a book – the Gospel according to him in his left hand and a feather as a strument of his service to God in his right hand.

Golden rays from the figures espands toward the stary sky of the vault and the Word of God announced by the evangelists is implemented in the life and, at the end, in the violent death of two great saints and martyrs, saint Stephen and saint Lawrence. The two saints-martyrs represent the bound between the Church of Jerusalem and the Church of Rome. Fra Angelico (with his workshop) decorated the three walls of the Vatican Chapel  with two paralel narrative cycles referring to the example of their life and martyrdom. The decoration of the private papal Chapel was commisioned to Fra Angelico by Pope Nicolas V, Lorenzo Parentucelli, born in La Spezia and buried in the grottoes of the Saint Peter’s Basilica in the Vatican. The message of the Church and Fra Angelico’s faith and prayer have been transformed into the figures and colours of the Chapel, his spirituality and charity into concrete acts, his hope into artistic and spiritual light of his fresco decorations, which each time fulfill the visitor with joy and blessings.

Compared with the Angelico’s St.Marc’s monastery decoration in Florence, the Vatican Chapel is truly small and humble but and at the same time magnificient. Magnificient because of Angelico’s  respect for the role of the Pope as vicar of Christ on earth. The two tiers paralel narrative cycles immediately with evangelical force touches the soul of the visitor. The message is also the manifestation of Angelico’s vocation, life, mission.

Eight figures of Doctors of the Church – two of them representing the Oriental Church, complete the decoration and can be interpreted as the desire for unity of different traditions in the Church under the spiritual supreme guide of the Pope and in obbedience to the authority given to him from Heaven. Each of the Doctors is painted individually, under architectural gothic styled canopy and inside framed fields of the arches. The name of the Doctor can be read at the marble base of the canopy under his feet: Leo the Great, St.Ambrose, St.Augustine, St.Gregory the Great, St.Thomas Aquinas, St.John Chrysostom, St.Athanasius and St.Bonaventura (instead of St.Jerome). In fact, in the literature regarding Angelico’s Nicolas’s Chapel decoration we often find St.Jerome replacing St.Bonaventura – the beard of the saint and the cardinal’s hat could have easily confounded the scientists in identificating the saint doctor painted in the Chapel by Angelico. Observing attentively the Chapel decoration we find the name of St.Bonaventura, born in wonderful Bagnoregio not very far from Rome, and proclamed Doctor of the Church by Pope Sixtus V directly written under his cardinal’s hat and feet.

The full figure of the Doctors of the Church are set in narrow arches formed at each side of the Chapel: over the altar and over it’s entrance, each of the Doctors holds a book and has been painted with liturgical vestments.

The window embrasures of the Chapel complete the theological composition of the decoration with the busts of Old Testament prophets and patriarcs.

St.Stephen’s preaching to the people of Jerusalem (seated women and standing men) and St.Lawrence’s blessing and healing a blind man in prison complete the main decoration episodes and fictive drape and flower decoration enriche the beauty of the Chapel. Giorgio Vasari’s Stoning of St.Stephen altarpiece (in substitution of the Deposition from the Cross probabely formerly situated over the altar) completes the Chapel’s unified beauty and truth of the message of Jesus who said (Marc 8,35b-36): “Anyone who loses his life for my sake and for the sake of the Gospel will save it”.

In conclusion, the message left to us by Fra Angelico painter and member of the domenican order can be actually interpreted and summarized for our present days in the following four points:

In Fra Angelico’s decoration the handing over the coin from the hand of St.Stephen to the woman (almsgiving) precedes the preaching of the saint to the inhabitants of Jerusalem: evengelisation follows the previous distribution of goods , testifies the importance of sharing. For Fra Angelico, as the Acts of the Apostles refer, the martyrdom of St.Stephen, his suffering and his death in and with Christ is unseparable from prayer and heart free from violence, as preaching from distributing of alms: “As they were stoning him, Stephen said in invocation, ‘Lord Jesus, receive my spirit’. Then he knelt down and said aloud, ‘Lord, do not hold this sin against them’.” Contemporarly, Fra Angelico painted the figure of St.Lawrence as wearing a dalmatic of red colour, decorated with wonderful golden burning fire flames and the name of JESUS CHRIST in golden letters embroided. Colours and flames simbolizing St.Lawrence offering, love, martyrdom and the Holy Spirit, the third Person of the Holy Trinity. St.Stephen and St.Lawrence concluded their lifes with martyrdom, they followed Christ radically. From Angelico’s decoration we see that the discipleship to Christ for Fra Angelico is inseparable from the service to the brothers.

The message of Angelico’s work does not address just the faithful but includes everybody, without any preference: also persons of different profession of faith or without faith are each time touched by the beauty of his work, kindness of his spirit and excellent artistic execution. All kind of human being, of different colour, cultural background, past, present or future is embraced by the beauty of his Chapel decoration (executed by Angelico together with his workshop) that the Vatican still conserves, protects and shares with the world. Angelico’s artistic production is expression of his own inner spiritual unity, of the Beauty which brings the earth to Heaven and opens the veil of Heaven to us, still pilgrims on earth.

Pope Pius XII in his Discourse in the occasion of the opening of the exhibition dedicated to Fra Angelico on 21 April 1955 called him “estatic painter of Mary Queen of Heaven” reminding his extraordinary masterpieces regarding the Virgin Mary. Next time you come to Rome, you can admire one of them at the Vatican Museum’s Picture Gallery: a wonderful Madonna with Child and a flower in her right hand, between St.Dominic and St.Cathrine of Alexandria and surrounded by angels, which was painted by Angelico around 1435. Line your eyes at the incredible rythm created by the delicately painted hands of the figures.

With my best wishes,

Your ticket for the: Fra Angelico Niccolina