The Veiled Madonna that Fascinates the World

In these days of uncertainty, general downtime, of closed museums, theaters, and cinemas, of life so different from what we are used to, it can help to understand the role that Beauty can play to overcome moments of discouragement and fear, but also to be assured of the essential role beauty plays throughout our life’s journey.

We owe the recognition of beauty as a transcendental property and the notion of being to the ancient Greeks, the tradition of Dionysius Areopagita, and to Saint Augustine. Especially the mysticism of the medieval Masters: from Alexander of Hales to Saint Bonaventura and in particular to Saint Francis, who understood Beauty, or Pulchritunis, as both a property of being and one of the names of God.

One of the great admirers of Beauty in the modern age was Fedororo Dostoevsky. “Beauty will save the world” is a famous phrase of Prince Lev Nikolacvic Myskin, protagonist in his novel, The Idiot. What was Beauty for Dostoevsky? Many do not know that the eminent Russian writer had a predilection for Raphael. In particular for a work by the Maestro d’Urbino: the Madonna Sistina – one of the most admirable paintings in the whole history of art. In this Year of Raphael 2020 I would like to share with you its/his story 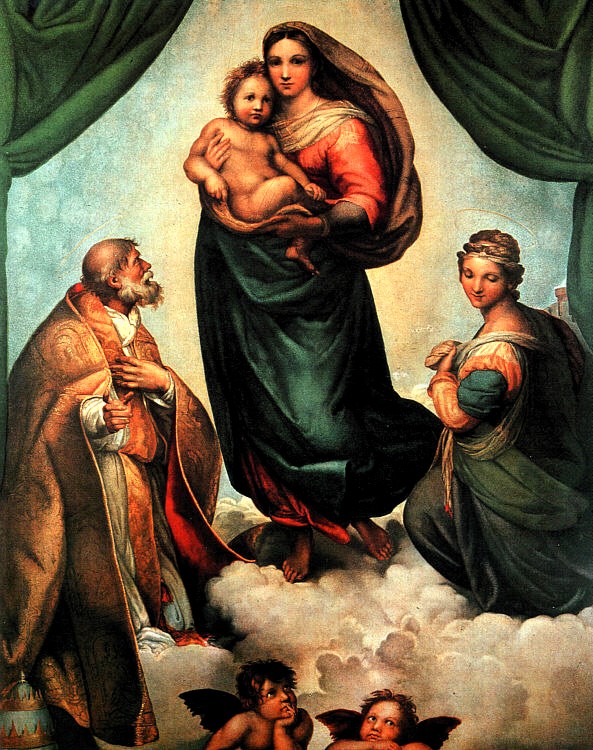 During his years in Rome, Raphael conceived and painted a marvelous and meditative veiled Madonna with the Child in her arms hovering alone in the sky on a cloud with Saint Sixtus and Saint Barbara on each side and below the two most famous angels in the history of art.

Painted between 1512 and 1513 on a possible commission from Pope Julius II del Rovere, ( the Pope who commissioned the new basilica of Saint Peter, the Vatican Belvedere, the vault of the Sistine Chapel and the Raphael Rooms). Pope Julius II wanted to donate it to the convent of San Sisto di Piacenza, in honor of his uncle Pope Sixtus IV and to thank the Piacentines for their devotion to the Roman Church.

These are the years that all art historians consider the pictorial vertex of the master from Urbino, not only for the skillful play of lights and colors, but also for an awareness and maturity in the iconographic choices. In particular, the will to enable the viewer to share and participate in the scene. The Madonna and Child are in motion, reaching out to the faithful. The Pontiff exhorts and invites – with the gesture of his hands – to take part in the mystery and the painted message, but also in the very beauty of the Virgin and the Savior.

From 1514 the work decorated the apse of San Sisto in Piacenza, where it remained until 17 54 when it was sold by the Benedictine monks to Augustus III of Poland or Saxony (known as the Corpulento) for the incredible sum of 25 thousand scudi and brought to Dresden. On the altar in Piacenza, the copy made by Pier Antonio Avanzini was placed in the sumptuous original setting where it is still found today.

The most admired work of all the extraordinary collections in Dresden, the Madonna Sistina had a special meaning for Dostoevsky, who mentioned it in several novels. Anna Grigor’evna, his second wife, tells in her memoirs of the stop in Dresden during the journey made with her husband in 1867: “Fedor loved Dresden very much, for his famous art gallery and the magnificent gardens ( … ) We arrived at one of the best hotels, we changed clothes, and we went and visited the museum, which my husband wanted to show me before anything else( … ) My husband went through all the rooms without stopping and led me directly to the Madonna Sistina. He considered this as the greatest masterpiece created by a human genius. Later I saw him standing for hours in front of that vision of unparalleled beauty, which he admired with tenderness and transport.”

At the outbreak of the Second World War, the Nazis hid the Madonna Sistina and hundreds of other works of art in the caves near the city to protect them from the Allied bombings – Dresden was practically razed to the ground. In May 1945, when the Red Army arrived in Dresden, they found the city museum completely empty.

A Soviet army officer Leonid Rabinovich Volynskij was commissioned by Stalin to find the Madonna Sistina at all costs. Volynskij interrogated dozens of witnesses. When he finally found the treasure, he transferred it in secret to Moscow. In the Soviet capital, the painting was subjected to careful restoration by the best masters of the time. Hidden in the basement of the Puskin Museum, the Russians for a long time denied they stole it from Germany.

In 1995, to celebrate the Warsaw Pact, Moscow decided to reveal possession of the painting and return it to Dresden. First it was exhibited in the halls of the Puskin Museum, and an extraordinary thing happened there. From May 2 to August 20 the Madonna was visited by over one million and two hundred thousand people, forcing the museum to keep the rooms open from 7 in the morning to 11 in the evening to allow the huge influx of visitors.

It is probable that the Russian people knew the many literary references to the Madonna Sistina and knew that for Dostoevsky the contemplation of the Madonna of Raphael was his personal therapy: “We certainly cannot live without bread, but also to exist without beauty is impossible,” he repeated. Beauty is more than aesthetic; it has an ethical and religious dimension. He saw in Jesus a sower of beauty.

Pope Francis gave special importance to the transmission of the Christian faith through the Via Pulchritudinis (the way of beauty). It is not enough that the Gospel message is good and true. It must also be “beautiful”, because only in this way does it reach people’s hearts and arouse the love which it attracts. It is good that each catechesis pays special attention to the “way of beauty”. Announcing Christ means that believing in him and following him is not only a true and just thing, but also beautiful, capable of filling the life with a new splendor and a profound joy even in the midst of trials. In this perspective, all expressions of authentic beauty can be recognized as a path that helps you meet with the Lord Jesus.

It is not a matter of fomenting an aesthetic relativism, which can obscure the inseparable link between truth, goodness and beauty, but of recovering the esteem of beauty in order to reach the human heart and make the truth and goodness of the Risen One shine in it. If, as Saint Augustine says, we love only that which is beautiful, then the incarnate Son, as the revelation of infinite beauty, is supremely lovable and draws us to himself with bonds of love. So a formation in the Via Pulchritudinis ought to be part of our effort to pass on faith. Each particular Church should encourage the use of the arts in evangelization, building on the treasures of the past but also drawing upon the wide variety of contemporary expressions so as to transmit the faith in a new ‘language of parables’. We must have the courage to find new signs – as the apostolic exhortation Evangelii gaudium invites us to do – new symbols, a new flesh for the transmission of the Word, the different forms of beauty that manifest themselves in various cultural contexts; including those unconventional beauty modalities, which may be of little significance for evangelizers, but which have become particularly attractive to others.

Your ticket for the: The Veiled Madonna that Fascinates the World

The Veiled Madonna that Fascinates the World