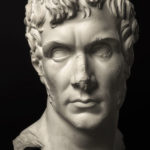 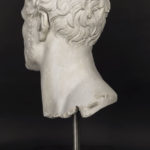 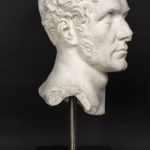 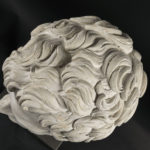 On December 9, 1815, friends and admirers gathered to remember the famous writer, painter and critic, Giuseppe Bossi. Bossi, who served as the Secretary of the Brera Academy between 1801 and 1807, was a dynamic and important intellectual personality of the Illuminaries and Romantic periods. At his funeral service held in S. Giorgio in Palazzo, the famous poet, Gaetano Cattaneo, recited a funeral prayer. Two years later, in 1817, the Academy of Fine Arts of Brera dedicated a beautiful “erma”, carved by Camillo Pacetti, to the thinker. But, perhaps the most striking homage to Bossi is the bust made in his memory by sculptor Antonio Canova. Originally intended for the cenotaph designed by Palagio Palagi and Giacomo Moraglia, it was inaugurated in the Sala Custodi dell’Ambrosiana on May 16, 1818.  This bust was the result of a great friendship between the two artists, characterized by mutual respect and unconditional devotion. The hundreds of letters that the two exchanged between 1801 and 1814 stand as testimony to their great amaraderie. Canova also stayed with Bossi at his home in Palazzo Durini in Milan while the sculptor traveled and gave lectures in the early nineteenth century. There are two existing casts of Canova’s portrait of Bossi, both slightly different from the version in marble at the Ambrosiana; one is in the collection of the Gipsoteca di Possagno and the other, in the Vatican Museums.The works by Canova now in the Vatican Collection were discovered in the sculptor’s studio by Antonio d’Este following the Canova’s death. Upon his own death, d’Este donated the works to Cardinal Placido Zurla, who then bequeathed them to
Pope Gregory XVI in 1834. The Pope bestowed them to the Seminario Romano Maggiore in Laterano. This portrait has been in the Vatican Museums’ collection since 1984.The attention that Canova lavished on these casts presents an excellent opportunity to learn about the process of creating sculpture. Canova was first introduced to plaster casts in Venice, where the artist became fascinated with the collection of Abbot Phillip Farsetti. Farsetti’s eclectic collection of plaster casts included casts of both ancient works and those of more modern artists such as Michelangelo, Sansovino, Giambologna, and Duquesnoy. During his trip to Rome in 1779, Canova recognized many works from Farsetti’s collections and became convinced of the importance of molds. Once Canova settled in the capital, he began an ongoing collaboration with the expert teacher Vincenzo Malpieri to create casts not only of the clay models upon which he would base his marble sculptures, but also of the finished works themselves, which he then magnanimously made available to fellow sculptors. Their purpose, however, was not wholly instructive. Many of these casts were destined for private residences, where they were seen both as art and as a physical manifestation of the refined taste of the owner.This bust is affected by missing areas, which must be fixed by plaster that will fill in the deficiencies. After scientific investigation, the restorers will complete the intervention by cleaning and rebalancing of the surface. Based on the experience of similar pieces as these, we plan to complete a proper cleaning, a balancing of the tones of the surface color, as well as other small technical adjustments that become clear during the intervention.

Support for Sculpted Portrait of Giuseppe Bossi by Antonio Canova

Your ticket for the: Sculpted Portrait of Giuseppe Bossi by Antonio Canova