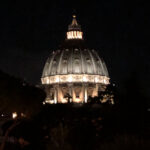 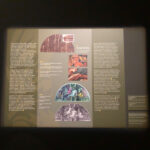 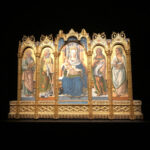 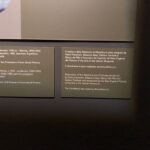 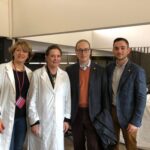 In the Madonna and Child altarpiece, the signature and date of the artist are inscribed on the marble steps under the foot of the Virgin, reading: “OPVS.CAROLI.CRIVELLI / VENETI 1482”. The painting originates from the Church of San Francesco in the town of Force, near Ascoli Piceno. Pope Pius VIII wanted the work displayed in Rome in the Lateran Pinacoteca, where it was placed in 1844. In 1908 the altarpiece was documented as part of the Vatican Pinacoteca of Pius X, and after subsequent transfers within the galleries of the Museums, it is now exhibited in Room VI of the Pinacoteca.

The enthroned Virgin lovingly holds the Christ Child. At her feet kneels a diminutive Franciscan in prayer, the identity of which is most likely the patron of the altarpiece. The composition is dense with symbolic references to Christ the Redeemer, such as the apple in the Christ’s right hand. The apple is an allusion to the Tree of the Knowledge of Good and Evil, a potent emblem of original sin. In the gesture of holding the forbidden fruit, Christ takes on the weight of man’s sin, which he will expiate with his blood during the Passion.

Carlo Crivelli (ca. 1435-1494) was born in Venice but trained in Padua in the renowned workshop of Francesco Squarcione (1397-1468). In Squarcione’s workshop, Crivelli worked alongside other young artists such as Cosmé Tura, Marco Zoppo and Giorgio Schiavone. During the mid-fifteenth century, Padua was an important crossroads for the fluid coexistence and intersection of the different artistic tendencies active in the peninsula. The late Gothic tradition was still very much alive due to Byzantine culture prevailing in Venice, but there was also the budding presence of realistic and naturalistic styles of representation and a growing interest in recovering the ancients. The region experienced the innovative stimuli of the many Tuscan artists passing through the city such as Filippo Lippi (documented between 1434 and 1437), Paolo Uccello (in 1445), and the great sculptor Donatello (between 1443 and 1453). In the fervent Squarcione workshop, young talents with these seemingly contrasting artistic styles were discovered and encouraged. Crivelli merged many of these style within his art, thus giving his work extraordinary pictorial results. His growth as an artist was also due to his relationship with Donatello, from whom the painter would learn to combine figural monumentality and linear expressionism.

With the painting’s gilded background and extreme richness of detail in the Virgin’s crown, her richly adorned mantle, and the variegated marble of her throne, Crivelli suspends the figures in an abstract and timeless dimension that clearly differentiates itself from the viewer’s reality. These particular visual elements of the work appear to both its Renaissance and contemporary viewers as divergent from the typical religious scenes created by artists in this period, thus making Crivelli one of the most intriguing painters of Northern Italy in the fifteenth century.